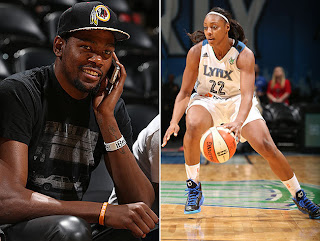 Kevin Durant and Monica Wright were both highly touted Washington, D.C.,-area prep basketball stars in high school, but the hour's drive separating Durant's home in Prince George's County, Md., from Wright's in Prince William County, Va., meant the two didn't wind up actually crossing paths until the 2006 McDonald's All-American national showcase in San Diego. What began there as a friendship has since developed into something more, as the 24-year-old Oklahoma City Thunder star and the just-about-to-turn-25-year-old reserve Minnesota Lynx wing player are now engaged to be married. News of the engagement first appeared Sunday on gossip sites Media Takeout and Hollywood Life, and was subsequently confirmed by Darnell Mayberry of The Oklahoman before Wright herself answered in the affirmative after scoring a season-high 17 points off the Minnesota bench on Sunday as the Lynx blew out Diana Taurasi's Phoenix Mercury. (Clearly, Ms. Wright was in a good mood.)
Posted by Kasuwell at 10:37 AM